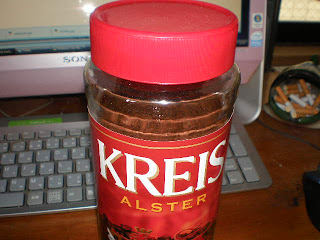 
Kaldi was the Ethiopian goatherder who discovered the coffee plant.

Safflower (Carthamus tinctorius L.[1]) is a highly branched, herbaceous, thistle-like annual, usually with many long sharp spines on the leaves. Plants are 30 to 150 cm tall with globular flower heads (capitula) and commonly, brilliant yellow, orange or red flowers which bloom in July. Each branch will usually have from one to five flower heads containing 15 to 20 seeds per head. Safflower has a strong taproot which enables it to thrive in dry climates, but the plant is very susceptible to frost injury from stem elongation to maturity.

Traditionally, the crop was grown for its seeds, and used for colouring and flavouring foods, in medicines, and making red (carthamin) and yellow dyes, especially before cheaper aniline dyes became available.[2] For the last fifty years or so, the plant has been cultivated mainly for the vegetable oil extracted from its seeds. In April 2007 it was reported that genetically modified safflower has been bred to create insulin.[3] Safflower oil is flavorless and colorless, and nutritionally similar to sunflower oil. It is used mainly as a cooking oil, in salad dressing, and for the production ofmargarine. It may also be taken as a nutritional supplement. INCI nomenclature is Carthamus tinctorius.

Safflower purchased at a market in Turkey

Safflower flowers are occasionally used in cooking as a cheaper substitute for saffron, and are thus sometimes referred to as "bastard saffron." Safflower seed is also used quite commonly as an alternative to sunflower seed in birdfeeders, as squirrels do not like the taste of it.

Safflower oil is also used in painting in the place of linseed oil, particularly with white, as it does not have the yellow tint which linseed oil possesses.

Lana is a strain of Safflower that grows in the southwestern United States, most notably Arizona and New Mexico.

In colouring textiles, safflower's dried flowers are used as a natural textile dye. Natural dyes derived from plants are not widely used in industry but it is getting more important world wide because of naturality and fashion trends. The colourful matter in safflower is benzoquinone-based Carthamin, so it is one of the quinone type natural dyes. It is a direct dye (CI Natural Red 26) and soluble. Yellow, mustard, khaki, olive green or even red colours can be obtained on textiles, but it is mostly used for yellow colours. All hydrophilic fibres (all natural fibres, such as cotton, wool, etc.) can be dyed with this plant since it can be classified as a direct dye. Polyamide can also be dyed without amordant agent because of its wool-like chemical structure. Polyester, polyacrylnitryl and others which are hydrophobic synthetic fibres can be dyed only in the existence of a mordant.

Safflower is one of humanity's oldest crops. Chemical analysis of ancient Egyptian textiles dated to the Twelfth dynasty identified dyes made from safflower, and garlands made from safflowers were found in the tomb of the pharaoh Tutankhamun.[5] John Chadwick reports that the Greek name for safflower occurs many times in Linear B tablets, distinguished into two kinds: a white safflower, which is measured, and red which is weighed. "The explanation is that there are two parts of the plant which can be used; the pale seeds and the red florets."[6]

Safflower was also known as carthamine in the 19th century.[7] It is a minor crop today, with about 600,000 tons being produced commercially in more than sixty countries worldwide. India, United States, and Mexico are the leading producers, with Ethiopia, Kazakhstan, China, Argentina and Australiaaccounting for most of the remainder.

Other names include Sallflower, Beni, Chimichanga, or Carthamus Tinctorius.

According to legend, Kaldi was the Ethiopian goatherder who discovered the coffee plant.

The story is probably apocryphal, as it was first related by Antoine Faustus Nairon, a Maronite who became a Roman professor of Oriental languages and author of one of the first printed treatises devoted to coffee, De Saluberrima potione Cahue seu Cafe nuncupata Discurscus (Rome, 1671). [1]

"The myth of Kaldi the Ethiopian goatherd and his dancing goats, the coffee origin story most frequently encountered in Western literature, embellishes the credible tradition that the Sufi encounter with coffee occurred in Ethiopia, which lies just across the narrow passage of the Red Sea from Arabia's western coast."[2]

In modern times, "Kaldi Coffee" or "Kaldi's Coffee" is a popular name for coffee shops and coffee roasting companies around the world.[4]

It also played a small, yet significant role in the Cold Case episode "Creatures of the Night." The victim, who was planning on opening up an espresso shop, is told the story of Kaldi by a friend, who gives him a goat-shaped pendant as a "good luck" token. The pendant later turns up as evidence in his murder.