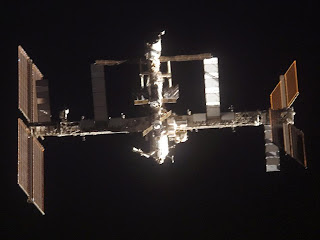 Beauty From Above
This image of the International Space Station was taken as Space Shuttle Discovery approaches the station during rendezvous and docking activities during the STS-120 mission. Docking occurred at 7:40 a.m. (CDT) on Oct. 25, 2007, as the two spacecraft flew over the Atlantic Ocean just off the coast of North Carolina.

STS-120, the 23rd shuttle flight to the station, delivered and installed Harmony Node 2, which allows the addition of new European and Japanese space laboratories.